United States. Data presented by Atlas VPN, revealed that nearly one in ten (9%) of internet users who use Wi-Fi passwords have never changed theirs. In addition, 9% do not know how to do it.

The data is based on PC Matic's survey of approximately 2,500 people in the United States and is presented in the 2022 Password Habits and Hygiene Report.

While some Wi-Fi users updated their Wi-Fi passwords, 37% have not done so since their setup. Fortunately, the number of those people has dropped by 4% since 2021.

On the other hand, 23% change their Wi-Fi passwords annually. Meanwhile, the remaining 22% take their network security very seriously and update their passwords every month, a 4% increase over the previous year.

Default passwords are easy to crack, and leaving Wi-Fi poorly protected can have many serious consequences for the network owner.

Malicious actors can use someone's Wi-Fi to access illegal content and perform other illicit activities. But it is the owner of the network who can be held responsible for all the petty crimes of the perpetrators, since any investigation would lead to the owner.

In addition, perpetrators can monitor unencrypted traffic sent over the network, including personal information such as addresses, passwords, financial details, and more, which they can then use to commit fraud. 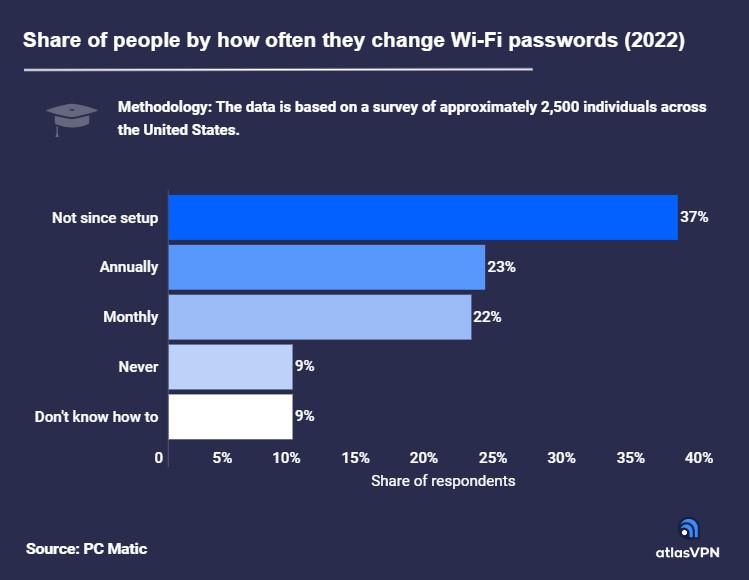 *Change your router's administrator credentials. Hackers can look up the default network name (SSID) and password that comes with it. Therefore, changing them is one of the most important steps you can take to ensure the security of your network. Use a long password (at least eight characters) with uppercase and lowercase letters, numbers, and special symbols. Short passwords consisting of common words and basic number sequences can be cracked in seconds. Also, whenever you create a password, use a unique one. This way, even if one of your passwords is leaked in a data breach, none of your other accounts should be affected as a result.

*Keep your firmware up to date. Like any other software, router firmware may contain vulnerabilities. That's why it's important to always install the latest software patches available to minimize the chances of hackers exploiting vulnerabilities to hijack your network.

*Use a VPN. A virtual private network (VPN) like Atlas VPN adds an extra layer of security between you and the Internet by encrypting your traffic. So even if your connection is intercepted, the attacker would not be able to see your data, as it would appear in an unreadable (encrypted) format.