One of the elements that determines the efficiency of modern and smart cities (known as smart cities) is security. In that sense, having urban video surveillance systems becomes an essential factor of the world's cities, especially for their future.

But beyond being a matter of only security cameras, video management software or VMS systems (Video Management Software), play a fundamental role in providing situational awareness and faster responses to emergencies in urban centers. It is proven that the choice of software is closely related to the success and operational efficiency of smart and safe cities.

Contrary to what many assume, in Latin America there are several metropolises with the name of smart cities, a concept that lacks unification, but that basically refers to the localities that make use of innovation and Information and Communication Technologies (ICT) in favor of the management and provision of their different services.

Among the capitals of this part of the world best ranked in the Smart Cities 2021 study carried out by the Institute for the Development of Management (IMD), in conjunction with other organizations, are Buenos Aires (Argentina), Medellín (Colombia) and Mexico City.
The aspects analyzed and taken into account for the denomination were, among others, air quality, the offer of health services and affordable housing, internet access and public Wi-Fi points, as well as citizen security, through closed circuit television, or video surveillance.

Video surveillance, understood in its most modern concept as visual surveillance technology that combines the analog benefits of traditional CCTV (Closed Circuit Television) with the digital advantages of IP communication networks (Internet Protocol), is a concept that goes far beyond the mere security of certain guarded spaces.

Through open platform video management software, cities have the ability to monitor and control air quality, verify and decongest areas with high vehicular flow, control the capacity in spaces of great concurrence, the possibility of detecting alert sounds, manage data with relevant information for the authorities, among other options.

In this part of the world, 33% of the cases of crime on the entire planet are recorded, a scandalous figure if one takes into account that only 8% of the population lives in this region.

Latin American governments, both national and local, have taken actions of different kinds in favor of reducing crimes in their territories. 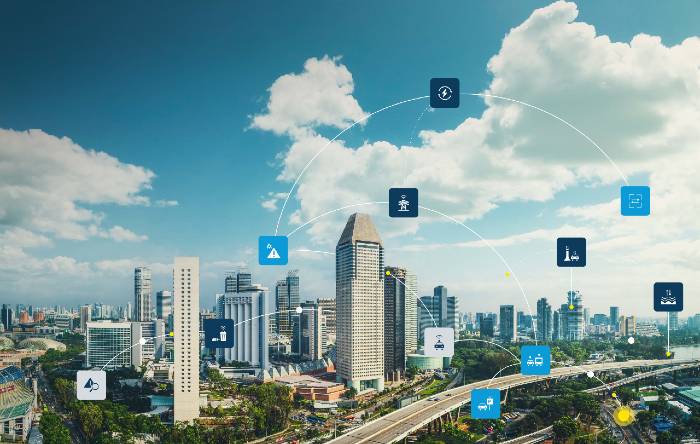 Although there is a long way to go and strategies to implement, the rulers have found in technology, specifically in video surveillance systems, an option to deal with crime, which in turn has given way to the discovery of other assets of great utility for their territories.

Among the most effective solutions offered by VMS for the modernization of smart cities, we can find those that we expose below.

Sound detection
Sound alerts are one of the most used tools in the security of smart cities. Being integrated with video surveillance systems, the response is much faster.

Video systems with intelligent video analysis (known as smart analytics) are in the ability to detect sounds such as screams and gunshots, in addition to detecting unusual and aggressive behavior, allowing a quick and timely response from the authorities.
In many smart cities, local governments make use of live or pre-recorded audios, as a security strategy and persuasion in certain situations.

Environmental monitoring
Monitoring the quality of air, water and soil is an urgency and a necessity of modern cities. Through a VMS with the ability to provide data and alerts in real time, the cameras become a strategic ally to achieve improvements in the quality of environmental life of the inhabitants.

Data Management
Data management is a great tool for mayors and / or local administrations.

By collecting information and data from citizens, faster and more efficient decisions can be made on the most urgent needs of the population.

Through a modern VMS, license plate recognition is made, which allows a timely identification of criminals in cases of kidnapped people and in the location of alleged criminals.

The data protection policy is an issue of great importance for administrations. In the market there are equipment and software that adapt to the protocols and regulations in force.

Capacity mapping/control
Capacity control has become more important as a result of the global emergency due to the COVID-19 pandemic.

Taking measures through video surveillance in terms of access control and capacity management of public places, is an effective solution that helps avoid unnecessary congestion and agglomerations.

24/7 surveillance
Modern cities do not sleep and have activities 24 hours a day, seven days a week. Therefore, in the modernization of smart cities in Latin America, permanent surveillance is essential.

It has been shown that spaces guarded by security cameras are less likely to present crimes.

In addition to this, 24/7 surveillance systems make it possible to detect areas with high vehicular flow and road accidents.

Vicente López, a success story
The diagnosis of Latin America in general shows that there is a long way to go for more cities to have the smart cities label.
A mirror in which you can look at the metropolises of this part of the world, is that of the town of Vicente López, located in the northern area of Greater Buenos Aires, in Argentina.

The municipality with about 300 thousand inhabitants, and more than a thousand cameras throughout its 33 km2, developed a project dedicated to increasing security through technological transformations in its existing video system. The local government acquired video management software, with the ability to support the systems and cameras already installed.

This system connected by fiber optics, gives the possibility that the cameras capture the images so that the content travels through the network until reaching the Urban Monitoring Center, a place that has a Data Center and servers for storage.

Through the video analysis offered by this VMS, the authorities have manifested substantial improvements in terms of crime prevention and decision-making.

Video surveillance has become the best ally of cities, its effectiveness over the years has been more than demonstrated.

Therefore, understanding that security goes far beyond having spaces guarded by cameras, seems to be the new challenge of local authorities. Having a video management software (VMS), high performance, adaptable to existing systems and with great recording capacity, became the best option for those metropolises that want to reinforce their security, and optimize many of their daily activities that, ultimately, are key elements to achieve the goal of becoming true smart cities.